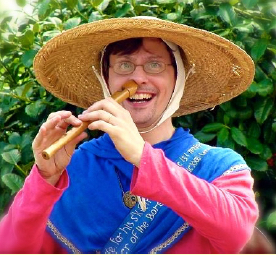 Efenwealt is the alter ego of singer/songwriter Scott Vaughan. In his Efenwealt persona, he is a modern-day minstrel, performing new songs about old stuff, and old songs about old stuff, and music inspired by medieval and renaissance Europe – be it fantasy, history, myth, or legend. He started writing and recording music in 1989 about his life as a medieval re-enactor in the Society for Creative Anachronism. Over the years he’s also become known for his interpretations and parodies of medieval and renaissance tunes. Efenwealt sings and plays guitar, recorders, flutes, krumhorns, bodhran (irish drum), ocarina, whistles, jew’s harp, kazoo, and many assorted musical toys, percussion, keyboards, and sound effects.

He performs mostly solo, sometimes with his wife Aenor, and sometimes for weddings and parties with the “Merry Minstrels“. He lives in Cary, NC with his wife and 2 children and works a day job managing outreach & communication programs for clinical research studies. For some reason he has a degree in architecture from NCSU that he doesn’t really use.

Buy CDs at my Kunaki store You may also find CDs there for The Blibbering Humdingers. Do not be confused by this. That is my other band.

You can get downloads at several places. My favorite is Bandcamp. (Again don’t be confused by the Humdinger stuff.)

Stream it on Spotify. In fact, if you’re into SCA music, I maintain a playlist of SCA artists for your enjoyment.